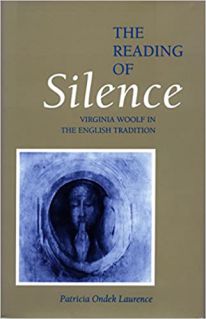 The Reading of Silence: Virginia Woolf in the English Tradition

I want to write a novel about Silence…the things people don’t say. But the difficulty is immense,” says a character in Virginia Woolf’s first novel, announcing Woolf’s life-long preoccupation with silence and the barrier between the sayable and the unsayable. In reading Woolf’s many silences–psychological, social, historical, philosophical–through a study of her narrative techniques, this book establishes a new rhetoric of silence. It infuses the silences of women with a new psychic and narrative life. In her novels, Woolf makes distinctions between what is left “unsaid,” something one might feel but not say; the “unspoken,” something not yet formulated in voiced words; and the “unsayable,” something ineffable or contrary to propriety.

The author advances the powerful strategy of privileging, as Woolf does, the “presence” of silent, observing and thinking women in her texts. Until now, post-structuralist and feminist critics have concentrated on explicating the role of the “speaking subject” in texts, ignoring those who are marginal and “silent.” When the subject, usually a woman or an observer (minorities, colonials, servants, children) does not speak in a text, such criticism has tended to read such positions as “absence.”

The author shows how Woolf challenges this notion and extends the genre of the novel by valuing and representing the inner lives of women, in particular, through a lexicon of silence, a punctuation of suspension, and metaphors and structures of silence. In the process, the author recognizes the connection of Woolf’s interest in silence with the tradition of English fiction. She examines silence as a ritual of truth for women in novels by Jane Austen and Charlotte Bronte, and as “absence” in a sample of male novelists–Samuel Richardson, Charles Dickens, George Meredith and Thomas Hardy.

This study does not view the silence of women solely as a sign of oppression. American feminist critics see women as oppressed by sexism, and their voices unheard in the culture; French critics see women as repressed in culture, and not represented in language. In contrast, the author presents silence as a cultural and narrative space in which women observe, think, dream, resist: a vital space that we as readers are learning to read.