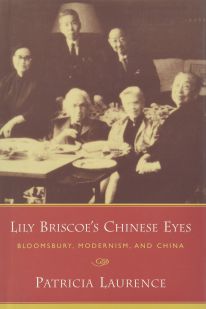 Lily Briscoe’s Chinese Eyes traces the romance of Julian Bell, nephew of Virginia Woolf, and Ling Shuhua, a writer and painter Bell met while teaching at Wuhan University in China in 1935. Relying on a wide selection of previously unpublished writings, Patricia Laurence places Ling, often referred to as the Chinese Katherine Mansfield, squarely in the Bloomsbury constellation.

This book counters East-West polarities and suggests forms of understanding that counter prevailing contemporary post-colonial stances. It inaugurates a new kind of cultural criticism and literary description that views Modernism as a movement that is multiple and evolving (under different names) in different parts of the world, about 1900-1940. British modernism is contained in the image of Lily Briscoe’s “Chinese eyes,” as described by Virginia Woolf in, To the Lighthouse. Woolf confers “Chinese eyes” upon Lily Briscoe, I speculate, to present a British artist enriched by the “foreign” or more specifically, the discernment of other cultures and places. Lily’s eyes suggest not the Empire’s foraging glance toward the distant lands of China and India for trade and gain, but the new aesthetic voyaging in the East during the modernist period. Her eyes map the East that Julian Bell and other English travelers and writers would explore and value in the next century, and from which a vast mass of new cultural, philosophical, and aesthetic perception and experience would emerge.

–Peter Stansky, author of On or About December 1910: Early Bloomsbury and Its Intimate World.

This book begins by tracing another border crossing, the romance of Julian Bell, nephew of Virginia Woolf, and Ling Shuhua, a writer and painter Bell met while teaching at Wuhan University in China, 1935-37. Ling Shuhua is now placed squarely in the Bloomsbury constellation because of the discovery of unpublished letters and documents that verify her relationship with Julian Bell.

This examination of the Julian Bell and Ling Shuhua relationship then expands into a study of parallel literary communities–Bloomsbury in England and the Crescent Moon group in China. Underscoring reciprocal influences, conversations among well-known British and Chinese writers, artists, and historians are presented, including Virginia Woolf, Vanessa Bell, G.L. Dickinson, Xu Zhimo, E.M. Forster and Xiao Qian. The study also includes rarely seen photographs of Julian Bell, Ling, and their friends, as well as a reproduction of Ling’s friendship scroll commemorating moments in the exchange between Bloomsbury and the Crescent Moon group.

While many critics agree that modernism is a movement that crosses national boundaries, literary studies rarely reflect such a view. In this study unpublished letters and documents, cultural artifacts, art, literature, and people are linked: China is placed in an aesthetic matrix of developing international modernism.